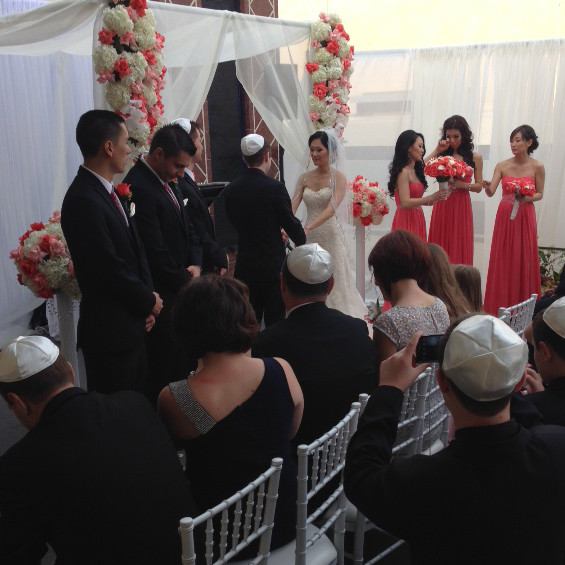 Our event took place at Anoush – Brandview Banquet Hall, which has been remodeled since our last event in 2013.  Upon arrival, we noticed the change to the lobby, a new elevator, a new terrace for the ceremony site, and giant new chandelier.  The upgrades are very welcomed as they made the venue much more accommodating for weddings!

So we started off our day with the ceremony, on the new terrace.  It was a Jewish ceremony, with a white-draped chuppah, and led by Rabbi Arthur Rosenberg.

He was clearly a seasonal American/Jewish Rabbi who was very well spoken and officiated the ceremony flawlessly. The highlight of the ceremony was the couple’s love story, narrated by the rabbi. It was beautifully told. The bride and groom were clearly touched. Tears from the wedding party and guests alike flowed.

Guests made their way back inside for the cocktail hour as they mingled and enjoyed the open bar.  Shortly after, we continued with the reception. Brandview has built-in blinds that reveal the reception as they scroll up, showcasing the ballroom that has LED wall and ceiling washes, white dance floor, and tables loaded with delicious appetizers, followed by dinner.

We were eager to take the reception from mellow to fun as we started the night off with interactive games, planned by Kaci from XOXO weddings.  DJO hosted the games, drawing laughs and cheers, as the guests got involved with the games, which worked as a great ice breaker to start the dancing.

It was at this moment that our entertainment group with DJO, percussionist, and saxophonistrocked the dance floor, uniting the Russian & Korean families with international dance music. We swayed between Top40, older classics, club music, and plenty of Russian music.